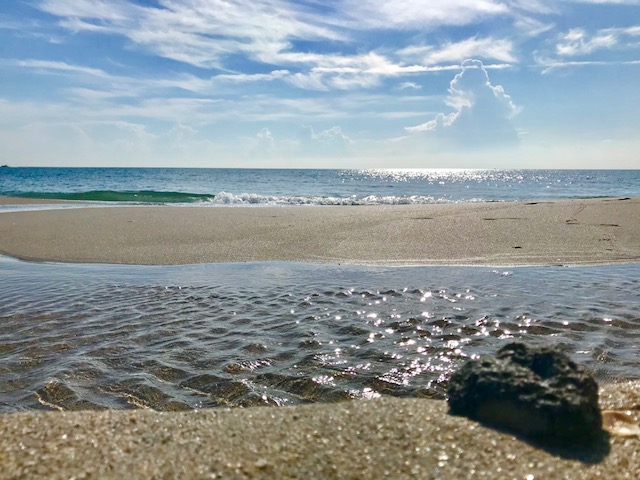 Seashell Philosophy by She: Volume 7 in a Series

Note: Been a while since I’ve written one of these because it takes getting a break by the seashore to get the inspiration for these pieces. Rare.

The summertime weather here in south Florida is intense because we get the double whammy of high temperatures coupled with high humidity that can envelope us like a heavy wool coat but the difference being that it’s wet and nonstop with its intensity.

As I’ve been a mother for over a decade now, I’ve found that our best chance for survival outdoors when in town here is to head for the coast immediately after the sun rises to enjoy the ocean before the sand becomes lava-hot and the eventual afternoon thunderstorm squalls move in.

When I arrived at the shoreline a couple days ago, my children found that the high tide had already crested and so the ocean would start its gradual retreat as we sojourned over the next few hours at the shoreline.

What’s exciting about this reversal of water flow is that one can get a glimpse of the shells, rocks and other small trinkets that the sea can give up any given day. There’s a thrill in watching the water retreat every few seconds while also yielding a new batch of goodies–the trick is to strike and pick up what you see and like before the next breaking wave takes it away.

During a time in our nation when any given media outlet online or print is exposing all the negative shades of our current social or political status, it’s liberating to stand between the barrier of land and water and to feel the force of the inevitable coupled with the unexpected. “The unexpected” being anything and everything that our offshore Gulf Stream can depose on the receding shoreline. “The inevitable” being the waves, propelled by the currents, ushered by the moon tidal forces and so forth.

Here’s the good news: we’re all so different. There is no “black” and “white”. It turns out that there are countless textures, shapes, colors and differing weights to the shells and rocks I sifted through my fingers as the waves broke against my legs with my feet sinking into the shifting sand at the magical barrier where land and sea overlap. How comforting when nature reflects the truth about who we are: an amazing array of physical people with unique personalities!

What Is Our Place? 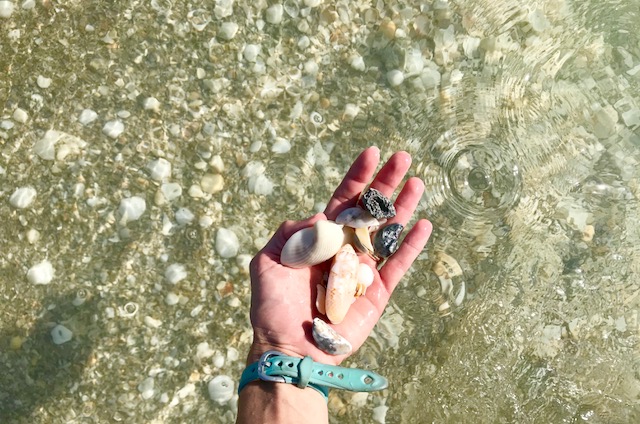 As I selected a variety of empty shells, sea glass and bits of rock I felt a rush of anger at the idea that our nation could ever fall into the trap of writing off sections of people based on their looks, pasts or perceived biases. Don’t we realize that what makes our world so beautiful are the differences that we all represent?

When we really take in the nature around us on Earth, it’s devastating to recognize how we’ve collectively cheated ourselves into thinking that we as humans are so caustic as to write off entire cultures, nations or people in general based on the color of our skin or our socio-economic backgrounds. What gives?

The Sorting of the Truth 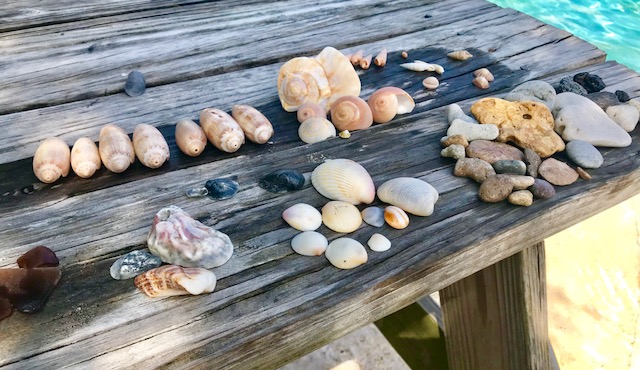 Every time that I return from the Atlantic Ocean shore with a pocket or bag full of shells, rocks and other artifacts I immediately put the finds into a bucket full of water at home and have fun sorting them with my children—even alone if the kids aren’t interested.

Here’s what I’ve found over the decades of practicing this ritual: every fiber of my being senses that nature mimics life incarnate and so all these splendid varieties of physical representations of what has trespassed our ocean system soothes my frazzled nerves. The truth is that we all have more in common with each other than we realize despite our differences.

Go Out: Pick Up Some Rocks or Shells!

As dull as it may seem to some folks, would encourage anyone who lives by a body of water (even lakes and streams) to enjoy the simplicity found in picking up natural deposits like rocks, driftwood, shells and countless other things yielded by these various bodies of water.

It’s a therapeutic exercise in harvesting what’s available and plentiful but it’s also a great lesson in recognizing individuality. There’s an amazing diversity out there in our geology and yet it’s a strong reminder of how we as people are full of different facets and hues—just like the handful of granite and quartz pieces I was able to retrieve from the Atlantic earlier this week. 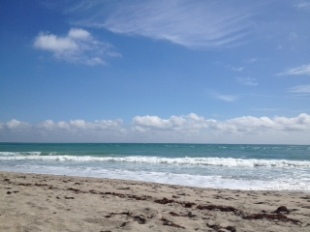 Diamond in the Rough Unexpected

Note: This is a blog short in a continuing series “Seashell Philosophy by She” of philosophical reflections during visits to the seashore…

Beautiful day.  The waves coming in from the Atlantic Ocean on the coast of Juno Beach were full of season-changing strength yesterday as the sun warmed our skin comfortably in the cool breeze.

My children and I arrived at the ocean with leftovers from our Easter holiday the day before.  After a busy day we came to the beach with my personal intention of laying on the blanket and doing close to nothing while the kids played in the sand and ate to their heart’s content out of the cooler I’d packed.

One of my offspring suggested that we walk the stretch of shore down to the Juno Beach pier and back to the Loggerhead portion where we had camped.  What I thought might be a shell-picking expedition resulted in in nearly 10 pounds of trash that I picked up as we walked with a grocery plastic bag.

Thankfully by walking with children I was exposed to the enduring and forgiving quality of their imaginative skills despite the sad reality of the litter circumstances–I was simmering with anger inside as I encountered bottles, cans, cigarette butts and even toothbrushes amongst other items of refuse along an otherwise glittering blue dance of water and shimmering sand that gripped our feet and legs with longing for relaxation.

Admittedly, I was so consumed by my judgement and disdain for the nameless straw people in my mind that had the audacity to trash our beach that I only was partially listening to and subsequently nodding affirmatively at my son’s declarations over the various shells or shark teeth he was “finding” as we walked along.  Never mind that he was merely picking up sparse pieces of shell or rock shards that resembled whatever his thoughts could name.

Halfway down the shoreline to the pier we stopped to sit at a perch of sand where the tide had eroded a small cliff that rose in height from the water’s edge to my waist–most fun for little kids to run up and down as long as there’s no roped-off area preserving a sea turtle’s nesting site.  Absently-minded I announced to my son that you never know what treasure you can find when you stop for a moment to sift through the place you’re in as we put our hands into the steep rise to feel through any tiny shells or rocks.

Again, he kept chirping to me that he was finding shark teeth as I continued to nod and murmur “uh-huh” as I watched my other child dancing through the small dunes and plants therein behind us.  Then I felt a nudge on my left arm and looked down at my persistent little one as he showed me the finds moment-by-moment, one of them catching my eye as I instinctually grabbed it out of his hand and looked at it closely–a shiny, dark grey shark tooth smaller than a dime. Incredible!

I couldn’t believe it, he’d actually found a real shark tooth in a massive pile of sand with no outward signs of hope for such a find.  There were no shell beds like the kind that show up after the high tides leaving high possibilities of fun discoveries.  This was literally just the kind of sand formation that evidently on this day only had high yields of human garbage nestled along its grooves and flats.

The truly sobering hit though came when my son asked me why I hadn’t believed that he would actually find a shark tooth–also alluding that why had I not considered that his prior declarations were true as well.  Ah, parent finds herself caught in her own act of lying by omission of responding in gentle truth–but I was so excited over this amazing shark tooth he had pulled out of nothingness that I decided to focus on telling him that although his other finds certainly resembled shark teeth, this one truly was the real deal.

How many times do we dismiss the possibilities of finding precious items among the mundane and written-off places?  Sometimes the most life-changing or affecting moments transpire when we’re on the common path or going through the motions of mindless daily activity.  More often than not we also fail to recognize the person beside us for who and what they are because we’re too busy listening to our own thoughts on the matter.

In my tiny slice of the universe yesterday I learned a humbling lesson–where I thought there was no way we’d find a shark tooth even with my maternal advice coming out of my mouth about treasure finds, I didn’t actually believe it.  I was proved wrong and learned a few additional lessons that I’m happy to include in my Seashell Philosophy by She collection as I continue to add other blog shorts.

Enjoy the treasure hunt of life! 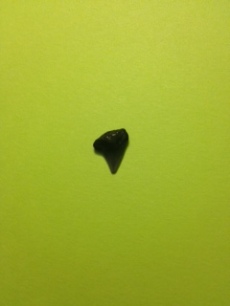